Writing is really busy at the moment but I’ve found time to start a new hobby (in addition to reading books and playing videogames). Originally, the idea was to find my wife something to help distract her from the tedium of housework and child-rearing. See expressed an interest in art so I went out an bought her some canvas, acrylic paint and a set of brushes. A few weeks later and the art stuff was still sitting around. So in order to get her started, I pulled out all the stuff, propped a canvas on our little round coffee table and started to paint a piece myself. Inspired by the following Qur’anic verses:

"God is the Light of the heavens and the earth;
The similitude of His Light is as if there were a niche;
And within it a Lamp: the Lamp enclosed in Glass;
The glass as it were a glittering star;
Lit from a Blessed Tree;
An Olive, neither of the East nor of the West;
Whose oil is nigh luminous, though no fire has touched it;
Light upon Light!  God guides to His Light whom He wills.
And God strikes similitude’s for men, and God has knowledge of everything"

I produced my first piece of Islamic art, a wind swept olive tree growing on the side of a mountain, with a glass lantern hanging from its boughs.

A week later, not dwelling on the fact that the art stuff is for my wife, I began my second project; a stylised painting of the Sulemaniya Mosque in Istanbul, also known as the blue mosque. An episode of Dr Who that featured a troubled Vincent Van Gogh helped to inspire the slightly fantastical version of the amazing building. 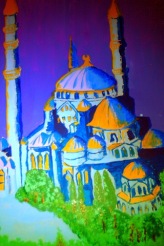 Larger versions of both of these paintings can be viewed at http://noorajahangir.spaces.live.com/default.aspx, in my defence, the original canvas versions look much better than the photographed versions.