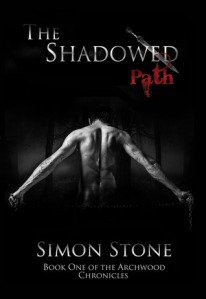 The Shadowed Path follows the attempts of a young man to put a traumatic experience behind him and get some answers as to why things went so badly wrong for him and his companions 4 years ago. The book is heroic fantasy in the vein of the late and great David Gemmell.
The book cover features a topless man standing with his back towards the reader holding what seems to be a chain, stretched between his hands, on a black background. Its not the most inspiring of covers and has little to do with the story itself. However, this isn’t really a major concern. The blurb gives a general idea of what the story is about, but again doesn’t really do it justice.
The story opens with a prologue, from the perspective of an official viewing a gladiatorial match whilst reflecting on his personal ambitions of rising to the position of a senator. I picked up a distinctively Roman flavour to the setting, although the opening scene is set in an Empire known as Prast. This is the only time that we see events through the official’s eyes and though he is important in an indirect way to the story, the book rarely touches on his story again. In fact, the whole purpose of the prologue was just to highlight that the Waystalkers, a non-human race of beings that serve the Prastian’s as slaves, are unable to take the life of a human, or any creature that has red blood in its veins. Whilst I understand why the author felt that this prologue was needed, I personally feel that he could have done with out it, as the point is driven home several times later on in the book. However, the prologue sets up what happens in the first chapter, when Marcus, a soft, rich boy and the main protagonist is caught in the Shadowland, a twisted jungle that is home to various monstrous creatures and predatory plant life, and then ambushed by Waystalkers who seem to be able to kill humans.
If this book had then gone on to chronicle how Marcus survived for four years in this living hell and became the fearless warrior he does then it probably would have been a story worthy of five-stars. But sadly, the book jumps the four most interesting years of Marcus’s life and rejoins him as his ship comes into Prast.
The remainder of the book follows Marcus’s attempts to learn what happened in the interim to his father and his mission to confront his step-mother for sending him into the Shadowland and stealing his heritage. Whilst this part of the story doesn’t lack in adventure and twists, the most interesting bits are when Marcus has flashbacks to his time in the jungle. In the end of this, the first volume in the Archwood series, we get an anti-climatic battle with an invading force of the Wur (a Viking like people) that has only a minimal build up before the final chapter sets the scene for the sequel.
The characters are likeable and come across as well-defined individuals. Even the roguish Lokan, the split-personality sociopath that is Jinx and the ambitious but fatherly Tycaleas show a balance of light and dark. Marcus seems emotionally detached and yet often rises above the dark memories of the Shadowland to help others. Lokan and Tycaleas seem to be interested primarily in power, riches and pleasures of the flesh, and yet would lay down their lives for Marcus and each other, bound together by their experiences in the Shadowland. Jinx/Sheena is a farm girl who witnessed the slaughter of her parents by creatures from the Shadowland, and through the inaction of soldiers and neighbours. She is also reviled because of the similarities in her appearance to the waystalkers. Now she wants revenge on the son of the man who ultimately is responsible, Marcus.
The world-building, despite borrowing terminology from the Romans is good, blending the familiar with the unfamiliar. The descriptions and conception of the Shadowland creatures are vivid and worthy of a Simon R Green story. The waystalkers have a unique culture and way of life, despite resonating in appearance to Navii, though this likeness was not intentional as they were conceptualized well before the Avatar movie was released.
The writing and vocabulary are solid, though there is a tendency of revision of sentences as if to drive home certain ideas. The fight scenes are what makes this book stand out and I would describe as Gemmellian in their awesomeness. Fans of heroic fantasy would certainly be pleased with them.
Despite the shortcomings in the plot, the world-building, characterization, creatures and fight scenes were enough to lift this book above other debut titles and kept me reading to the end. Would I buy the sequel? There are enough questions raised and left unanswered in this first volume to make me seriously consider reviewing the next one too. Based on the above reasons, I’m giving this book a solid 3 out of 5.