I know this blog is supposed to be about writing, but I’m allowed to talk about what inspires me right? At the moment, its videogames that seem to be inspiring me, so shut up and let me talk. Okay, I’ve spent some time to read up on the latest announcement that have come out of Gamescon, basically one of many games conventions that take place across the world in mostly glamorous, sparkly cities. There is the obvious long list of sequels being announced, but a few stand out as something that would make even a hardcore gamer sit up. The first is that Mass Effect 2, the brilliant sequel to the awesome original X-Box 360 game that debuted earlier this year on Microsoft’s console. Only now its been announced that the game is coming to PS3 too! For those of you who haven’t played the original, its an RPG game that I think is on par with Bethesda’s Oblivion and Fallout 3. What works so well on this game is that the dialogue, which usually is tedious and takes up a big chunk of what make RPG games take so long to play, is in the control of the player, meaning you can ask all the questions or cut to the chase, and either intimidate or charm information out of the non-playable characters. 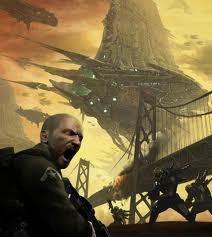 The other newsworthy item is the live action trailer for Resistance 3. The original title, Resistance Fall of Man, debuted as a launch title for the PS3 and had gathered a hardcore following since those early heady days of online death-matches on the PS3. The sequel had a better story mode but the multiplayer mode lost out to the superior Killzone 2. Follow the link and enjoy.