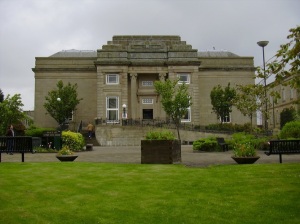 Last Friday, I spent two hours at Burnley Central Library as a Living Library Book. I was titled, Muslim Author. Most of the two hours were spent talking to Ben Kenyon from the Burnley Express and then to Mary, one of the librarians. The sub-zero temperatures and icy roads had kept away most of the punters from coming in.
If you live in the UK, you couldn’t have missed the coverage of the student protest outside Westminster Palace, as the Members of Parliament voted on the increase of student fees. The debacle inside the chambers of the commons was mirrored outside, as students and police officers resorted to violence, the former using chunks of smashed, concrete blocks and the latter using their batons and shields to bloody teenagers. But the true victim of the night was the possibility of free university education, especially if you want to study an arts and humanities subject. Next in the line of fire is library provision.
My mother took me to the library when I was just a toddler, a magical place full of colourful books, cartoon characters painted on the walls and windows and that wonderful smell of library books. When I turned seven and was exposed to the wonders of fiction, the library became a weekly destination for me and my best friend. We read every Tintin and Asterix book that the library service could provide, feeling grown-up as we used the reserving service to get a hold of the issues that weren’t native to our town library. Then we worked our way through the Fighting Fantasy and Choose Your Own Adventure books. But I cheated. I was reading straight up children’s novels and the teenage fiction that my elder brother would bring home, Famous Five, the Three Investigators and a number of film novelisation.
My first experience of the Internet in the 90s happened at the Ramsbottom Library, near the College were I was boarding. A £1 bought me an hour browsing the Yahoo webpages, now young people drop in and browse for free on fast connections. Whilst I was at Uni, the High Wycombe library provided me with access to a collection of DVDs, including World Cinema titles like Kurosawa’s Seven Samurai, at a much cheaper rate than my Blockbuster membership would have afforded me. I even borrowed a few film-score CDs and graphic novels.
Now I occasionally work in partnership with the library to promote homework clubs, literacy and community cohesion. I hope that the Lancashire Libraries will also work with me in the future when I want to promote literacy in conjunction with the launch of my novel. The trouble is, will the local library still be there when that happens? Will our kids be able walk to a warm building to borrow a few books, meet up with their school friends to work on a school project or browse the internet for free? Central government has already levied 28% cuts on the service, with some local authorities increasing it to 50%. Which of the many services provided will be cut then? Libraries are about the only place an adult can get a completely free education. They form a core part of our communities and our culture. The question is, are libraries important enough to you to want to try to save them? If they are, then pop down to your local library and speak to the librarian about how you can support and perhaps even save your local branch.