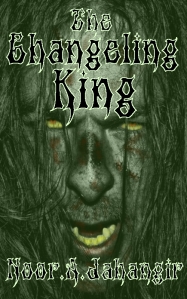 The Changeling King by Noor A. Jahangir
My rating: 5 of 5 stars

I wrote this book so maybe this isn’t the wisest thing to do. I mean, can an author give a balanced and objective review of their own work? There are times when you hate your work and at the same time, you are the one that bought the damn thing into the world. Whatever its worth, here is my honest and objective(ish) review of the Changeling King.

The story follows the adventures of six teens and told from the perspectives of three of them, but also from the POVs of other characters too. It starts from the POV of Vasch (I’m a member of the Vasch fan club), a troll who has been sent to Earth by the Trollking to assassinate Adam Phelps, a 13-year-old boy, because of who he will become in the future. Through Vasch’s eyes we see Earth as an alien place. The pollution in the air, Earth’s proximity to the Sun, the level of ambient noise, all attacks Vasch’s senses instantly. But he isn’t alone. He has a war-band of trolls with him to help complete his mission. The trouble is that certain members of the war-band want to lead the mission themselves.

Nathan Celic and his brother Logan have planned to spend the day out in the country with their girlfriends, Salina Phelps and Katrina Standbridge. Nathan’s day isn’t going as well as he hoped because Salina’s little brother, Adam is tagging along too. Then whilst they are swimming in a country lake, a gateway between worlds, buried beneath the lake for centuries is reactivated by the surge of energy created by Vasch and his war-bands arrival on Earth. Nathan, Logan, Salina and Katrina get sucked through. Adam is the only one left behind.

Nathan and the others wake to find themselves on another planet (Eridani), captured by strange elfin creatures called Alvors and are told that their only way home is in the very castle of the Trollking. They have to get passed him and his horde of trolls, goblins and traitor humans and alvors if they want to go home.

Back on Earth, Adam realises that he is being hunted by Vasch and his warband. Detective Karen Rainbow, a hard-nosed cop, is the only one who can protect him.

The other POV character is Sultan, a young Mughal prince who witnesses his father’s assassination and then flees into the wild. He is trained in the mystical path of the Sufi, and manages to accidentally transport himself to Eridani, only to be captured by the Trollking’s minions. Regardless of time and space, their destinies are tied together.

The book was originally pitched at the 13-18 age group, but at times the language used may have adults reaching for a dictionary. Also, there is violence in the book, though it is shown to be reprehensible. Perhaps the book is more appropriate for 15+ readers? Also, the sentence structures can seem a bit abrupt, perhaps due to the constraints of fitting what should perhaps been a longer novel into a more acceptable length.

Early on in the book, the chapters alternate between the three main plot lines, i.e. Adam’s story, Nathan’s story and Sultan’s story, but later on start to merge together until there is only two major plotlines running. Some readers may find the jumping around between POVs distracting as much YA is written from a single perspective. But I felt that a multiple POV strategy fit better with the epic setting of the plot. The characters are likeable enough, even when they are acting like douche bags, mostly because they are afraid or insecure. My favourite characters are Vasch and Sultan (so don’t be surprised if they feature heavily in future volumes).

Despite the various POVs and the epic nature of the plot, the story is fast-paced and there is rarely a senior-citizen moment of navel-gazing or overly flowery descriptions. This is very much a plot driven novel, but has a surprising number of layers and themes built-in. I don’t want to have to point them out here because part of the fun is working them out (absent parent, coming of age, homesickness, meaning of life, etc, etc). ahem. sorry.

I give this book a 5/5 because I wrote it, but it’s probably only worth a 4/5 (am I being too generous?), because it works at many levels, which will probably only become apparent after multiple read-throughs. So go ahead and download it, read it, review it and tell me if I’m wrong.

View all my reviews