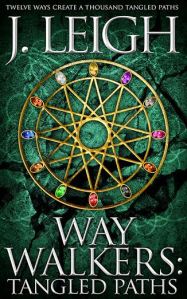 Jathen is the crown prince of the Tazu Kingdom, a draconic people who have the ability to shift from a scaly, humanoid form to full dragon form. The only problem is that Jathen is a pink-skinned, scaleless, moot.
The motif of the story sets up a interesting conflict for the protagonist and is essentially a travel and self-discovery story. Jathen is reviled by everyone in the Tazu court for being a moot and is hated by his uncle, the current monarch of the Tazu. TO make matters worse, his mother has had several failed pregnancies, and a number of babies that have died soon after birth. So when she does finally give birth to a Tazu baby that survives its first brush with death, thanks to Jathen, the king decides to announce that Jathen is no longer the crown prince. However, an offer from his Clansman friend, Hatori, gives Jathen the opportunity to travel the world, learn more about himself, and delay the question of succession for another five years.
Way Walkers is based upon a ‘Choose Your Own Adventure’ style series by the same author, and therefore the world building is already well-developed and extensive. The story is set in a post-apocalyptic Earth, after which humanity mutated into several different species, including the Tyrn, Clansmen (vampires that don’t mind the sun), the Lu’Shun and the Drannic. The cultures are a hotch-potch of different world cultures, predominately Asian and Arabian. People have also developed ‘Talents’, with varying levels of mastery and types of magical abilities. The flora and fauna of the world has also mutated and somehow the world is also populated by various species of dragon (not to be confused with Tyrn). But there is also working electricity, bullet trains and air ships too. This is perhaps the reason why the characters often fall into colloquial speech and use terminology that doesn’t fit well with the genre.
Jathen Monortith is the main the character and comes across as an angry teenager with self-esteem issues and lack of spiritual conviction. He has very little in the way of combat skills and is often content to let others fight his battles. It is lucky for him that he is usually surrounded by people who will come running to his aid. In the first part of the book, he has his sister, mother and nanny looking out for him. But then once he sets out on his adventure, he has the vampiric charms master, Hatori Chann, and his lover, and then a little further on, a young Clansman called Ass, who is handy with a crossbow and has a unique take on life.
The writing is fairly good but there are issues with pacing. The book is around 400 pages long with very little in the way of action, intrigue or romance to aid the readers traversal through the pages. There are plenty of fighters amongst the cast, but the writer doesn’t provide many opportunities for them to use their skills, and when she does, it is over so quickly that you could easily miss it. Political intrigue and industrial espionage is also hinted at in the book, but it doesn’t seem to figure much in whats happening at any give time, and although Jathen is given a love interest in the latter half of the book, again, not much wordage is given over to drawing out the affair.
Ultimately, this is a long winded and flawed book that spends too much time on world building and not enough time in giving the readers anything more to do than admire the scenery. The world building on its own can not carry a story, but luckily the characters are interesting enough in themselves and Jathen is likable enough to ensure that the story doesn’t flounder too much. Despite my criticisms, I did enjoy the read somewhat and therefore have awarded it a generous 3 stars.